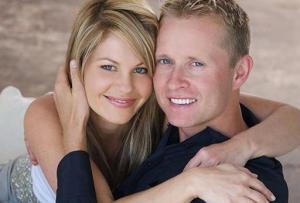 “Okay, everyone, just calm down”.

Those words came from former “Full House” star Candace Cameron Bure, during an interview with the Huffington Press last week.

She was talking about the buzz created when she described her role as “submissive” in her marriage to former hockey player Valeri Bure.

My sentiments exactly. Everyone take a chill pill.

The term “submissive” from a Christian viewpoint does not mean we are ready to  “throw away our right to vote“  (As one irate feminist host concluded).

Of course, not understanding the Christian view, I can see why women do get up in arms about the word “submissive”.

Let’s face it, we are the physically weaker sex. This puts us in a vulnerable position to men, and some may abuse it.

Then you get the backlash…the desire on the part of the wife to control and cut down her husband by nagging and bickering, rising up against him. Can you hear it now…?

Of course, the husband may not have that attitude initially, but he may grow resentful and oppressive as a reaction to the wife’s overbearing desire to dominate.

But I’m here to tell you that it doesn’t have to be that way. In Candace’s words, just calm down.

Let’s put down our defenses and take a look at a much misunderstood scripture passage about the roles of husband and wife:

This scripture is saying that a wife should submit to her husband, not because women are inferior, but because that is how God designed the marital relationship to function.

The original design was a leader/helper role to make marriage function in harmony. Look at it this way: In every organization, there are levels and positions, from CEOs to Receptionists, Generals to Privates.  Everyone has a role, or they would have a dysfunctional organization. Now take a look at what follows this verse, a verse that I’m not sure many feminist know is even there:

Husbands, love your wives, just as Christ loved the church and gave himself up for her to make her holy, cleansing her by the washing with water through the word, and to present her to himself as a radiant church, without stain or wrinkle or any other blemish, but holy and blameless. (Eph 5: 25-27)

Did you get that? Yes, wives are to submit to their husbands, butlet’s be very sure to remember that the Bible has outlined what type of man this is! He is not one to take advantage of that leadership in a selfish way. This type of man doesn’t flaunt his leadership or provoke his wife to anger.

A true leader recognizes the honor God has given him and is humble to use that leadership with care. He is grateful to God for the grace and love he himself has been given and loves his wife in the same way. An honorable man tempers his authority with love, and in so doing, will find that his wife is glad to submit to his leadership.

Each ordinance smooths over the rough edges of the other.

I guess I get a little weary and sad about the typical way I hear men and women relate to each other. There are so many power struggles, so many fallen attitudes that we see around us and take as par for the course. Turn on daytime TV and just hear all the “advice” on relationships and mind games that go along with it.

Better yet, cut out the static and don’t even turn it on at all.

There is a better way. Jesus came to bring healing to our souls by first laying down his life for us. We can then be given the capacity to love beyond ourselves as an expression of obedience and faith in Him.

I wonder if there’s anyone in the trenches right now. Maybe you’re on the verge of giving up. Maybe God would have you read this as an encouragement.

I also can’t help but wonder if there’s anyone who has come full circle.  You know God’s word on marriage is true because you’ve lived it. You would be a blessing to share your story!