There’s a story about a grasshopper that befriended a spider. “What’s the harm?”, he thought, while ignoring the risk. So he lingered close to the web, letting his guard down as he began to engage in conversation. With time, he found himself drawn further into the web. He tried to lift his feeler, then a limb, but couldn’t fly away. In a flash, the spider wrapped him up in the layers of his trap, and the grasshopper went from life and freedom–to being the spider’s meal!*

No one sets out to be entangled in a trap, but sometimes, like the grasshopper, the sin in our lives entangle us and render us spiritually immobile.

Thus, to continue our look at Hebrews 12:1-3, I’ve bolded our third study passage:

Therefore, since we have so great a cloud of witnesses surrounding us, let us also lay aside every encumbrance and the sin which so easily entangles us, and let us run with endurance the race that is set before us, fixing our eyes on Jesus, the author and perfecter of faith, who for the joy set before Him endured the cross, despising the shame, and has sat down at the right hand of the throne of God.

As mentioned in my last post, when the writer of Hebrews wrote this letter, he was addressing the struggle with legalism among the Jews. He describes this preoccupation as a sin that they were entangled in. They were continually being bound by the ceremonial laws that they believed they needed to gain salvation. They thought that maintaining this legalism would enhance them spiritually, when in fact they were being trapped and deceived.

They were not the first. Think of how Satan drew Eve into his own web with cunning words and lies. (Genesis 3:1-6). Think also of the great power sin has over our own hearts and minds, if we aren’t careful.

Are there any thoughts or actions that continue to trip you up?

How then, are we to “lay aside” these entangling sins? As a runner set on a course, we are to clear our path from the traps and snares that would bind our feet and cripple our race. We do so by recognizing the warning signs—that first enticement that sets the process in motion. Seems Eve should have done the same thing before the serpent (Satan) encompassed her!

According to our text, there is urgency to this, in that sin so easily entangles. It would be much easier to lay them aside sooner rather than later, wouldn’t it? How can any serious runner get two feet in front of him when his arms and legs are tied up?

Can you think of a time when you have recognized a particularly entangling circumstance in your life? What were the warning signs?

Excerpts from “The Race Before Us” 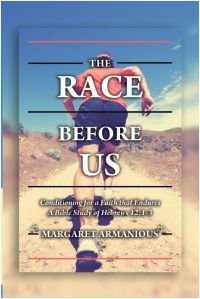 2 thoughts on “THE SIN WHICH SO EASILY ENTANGLES”